Parasite premiered in England on February 7th, 2020. It went on to make history just three days later, at the 92nd Academy Awards in Hollywood. Bong Joon-Ho won four awards, breaking records as Parasite became the first non-English film to win Best Picture. Joon-Ho’s work also won itself the titles of Best International Film, Best Original Screenplay, and Best Director. The movie, categorised as a dark comedy and a thriller, instantly left its mark on me. My appreciation for Joon-Ho’s work was not limited by the Korean dialect; in fact, I felt more drawn to the cinematography and music as a result of not focusing my full attention on dialogue. As I watched the movie for the third time, I found myself agitated at the thought that people are missing out on a once in a lifetime movie experience because of a language barrier… then I started making comparisons to a certain playwright that has suffered similar negligence because of linguistic barriers: William Shakespeare – the king of English literature himself.

It is undeniable that Shakespeare’s performative Elizabethan iambic pentameter is more than a stone’s throw from our modern linguistic norms. Yet, those who commit to dissecting the texts he published are rewarded with fanciful tales and clear societal commentary. Similarly, those who can watch Joon-Ho’s Parasite with subtitles are compensated with an unforgettable storyline and cinematic experience. The comparisons continue: both Shakespeare and Joon-Ho choose to monitor two opposing families; both family’s morals are called into question in both stories; and by the end of the plots, the main characters have reverted into their original states. Despite the four-hundred and twenty-five-year gap between the two texts, their parallels are indisputable. Even the crossover of genres is aligned, as audiences receive a slap in the face about two-thirds of the way into the plot, shifting from a light-hearted tone that mocks its characters to a somber and serious theme that threatens the characters we have just become so acquainted with. Perhaps the most interesting comparison is the final lines of both stories, as the bending of social structures results in a catastrophe for both parties and as a result, a new status quo takes hold.

Although Joon-Ho came up with the idea for Parasite in 2013, prompted by the notion that “everyone loves to spy on the private lives of strangers”, and not Shakespeare’s classic tale, it is hard not to draw links between the two tales. Both these stories, and links between them, are a prime example of showcasing how language barriers are gradually becoming extinct in modern-day arts. Hopefully, the widespread success of Parasite marks the beginning of a new era of cinematic experiences. 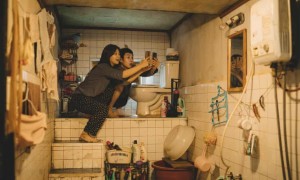